Cravings. We all get them.

Whether it’s for salty chips, a big slab of chocolate or something as obscure as pickles, our bodies often crave a certain taste or texture.

And honestly, once in a while, it’s not the worst thing in the world to ‘give-in’ to them.

For example if you’ve eaten a clean diet and stuck within your own nutritional principles for a week, and have been craving a Cadbury Cream Egg all day?

One Cream Egg after a week of eating nutrient dense foods isn’t going to suddenly reverse all the good work you’ve done.

If, however, your cravings for ‘unhealthy’ foods are frequent and overbearing, and you find you ‘give-in’ far more often than you say no?

Then it might be time to look at the underlying reasons you might be craving what you are, and address it before your progress halts.

One of the most common causes of cravings?

Throwing a curve ball at you straight away, but thirst is frequently confused with hunger, and hunger pangs (as your body is interpreting your need for liquids) often leads to specific cravings.

This might be particularly true if you’re craving something you might consider ‘refreshing’, such as an ice cream or lolly.

(Again, I’d just like to touch on this one last time before I move on: Eating something like an ice cream when you really, really want one, isn’t going to ‘make you fat’. There’s no such thing as an ‘evil-food’, but there is such as thing as ‘nutrient sparse’ foods, and over consumption will often lead to fat storage (for instance, if that one-off ice cream becomes a daily occurrence).

The most obvious solution to side step this predicament is to drink more water- although such a vague action step is unlikely to foster the greatest adherence. So instead of just offhandedly attempting to remain better hydrated, adopt the following method:

Purchase a one litre water bottle to sip on, and ensure you drink and refill it at least 3 times per day.

It can also be good idea, on the cravings front, to throw a pinch of Himalayan rock salt into the aforementioned bottle of water- especially in warmer climates whereby you’re more liable to be sweating out essential minerals.

The second cause of cravings you might not have expected?

Now I want to start this section with the clarification that no ‘macro’ is evil- that is to say; neither carbs, fat or protein are inherently responsible for increasing body fat.

That being said; if your diet involves frequently ingesting fast release carbs, such as white breads, fruit juices and rice, you’ll have blood sugar levels that peak and trough throughout the day.

And your body’s automatic response if your blood sugar levels crash a few hours after having a rice sandwich (a very odd choice of meal by the way)?

So how can you effectively avoid such sharp increases and decreases of your blood sugar, and subsequently offset sweet cravings?

Centre the majority of your meals around protein, healthy fats and fibre – all of which promote slow, sustained energy release. You can read more about this here.

So eat sensibly and stay hydrated; that’ll probably cover 80% of the cravings you were previously having.

However, it’s probably for the best that we acknowledge a few of the more common culprits of culinary desire.

What to do if you’re craving…. Crisps

Crisp cravings often come from your body’s need for sodium- hence adding a touch of salt to your water can aid in offsetting this urge.

That being said, sometimes the craving is for more than sodium; it’s for the entire experience of opening a packet and enjoying the crunch and aroma.

So how could we replace them with something a little healthier?

Ideally not peanuts. Almonds, cashews and walnuts would all be preferable.

And (I’m sorry to say) preferably not ready salted- as the process usually isn’t the healthiest if you’re grabbing them from behind a bar.

But that being said- unsalted almonds aren’t likely to curb your cravings; which is where roasting them with a little rock salt can come in handy for replicating that delicious crisp taste.

Don’t go nuts (see what I did there?) if you decide upon this replacement however- nuts are very calorie dense, so you’d ideally portion carefully at around half a handful to avoid over consumption.

And if you aren’t a nuts person?

Slice sweet potato very thin, into a crisp like shape, and roast them with a sprinkle of extra virgin olive oil in the oven- whilst it won’t have the healthy fat benefits of the nuts, it will still be less processed and contain a greater nutrient density than the original option.

What to do if you’re craving…. Ice Cream 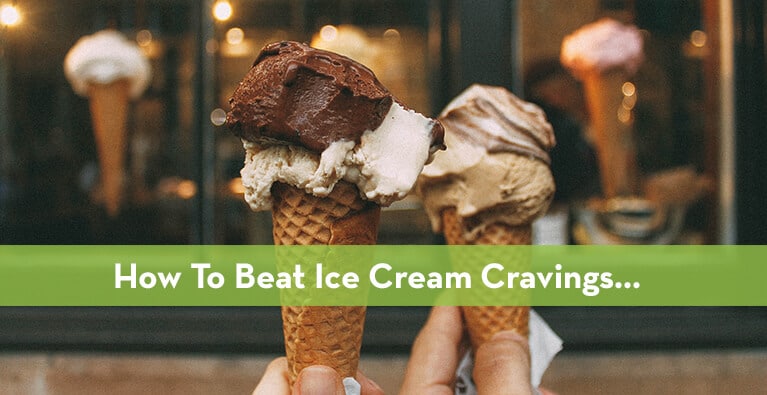 This is my Achilles heel.

Or, more accurately- this is what I love to eat once a week, because I’ve been training hard and eaten well outside of that, and deserve a treat.

But let’s work off the assumption you need to avoid it or you’ll be shoulder deep in tubs of Ben & Jerry’s on the daily.

Instead of reaching for the ice cream, try and replace it with Greek Yoghurt.

If you want to get truly fancy- grab plain Greek Yoghurt, mix in your favourite flavoured ice cream and leave it in the freezer for up to 2 hours.

This little beauty is high in protein, and will keep you full for far longer than a soft serve would have done.

What to do if you’re craving…. Sweets

Sweets are a fairly common vice, and they’re most often desired because our body wants a quick energy boost.

Now as we covered earlier on, this craving is most likely due to your blood sugar being lower than optimal, or possibly if you’ve trained, because your body wants to refill it’s energy stores.

Regardless of the reason behind your craving, sugary sweets are one of the most frequently cited foods for causing people to ‘fall off the wagon’.

Notice I did not say ‘fruit juices’, which I’d often put right up there with sweets in regard to their effect on the body (taking all the sugary sweetness out of a fruit without the fibre? That’s not a ‘healthy drink’).

Grab a handful and slowly (key word: slowly eating will also help reduce over-eating) eat them whenever you’re in the mood for some Skittles, and see how you feel after 20 minutes.

What to do if you’re craving…. Chocolate

Ah the most common culprit of them all.

And understandably so. And honestly, chocolate is pretty great for you.

But before you get all excited at the above sentence, it’s probably best we addressed something.

The milk and white chocolate that crowd our shelves? That stuff doesn’t count as chocolate.

No, when I say it can be good for you, I’m referring to the 80%+ dark chocolate that’s rich in antioxidants, and doesn’t have that ‘more-ish’ quality that the milk variants have.

Which is exactly why the real, super dark chocolate is my recommendation for side-stepping the milk chocolate desires. The bitterness does a great job of ensuring you don’t over eat it too, unlike the sugary taste ‘normal’ chocolate provides.

Although one other factor you might want to consider if it is a chocolate craving that’s afflicting you; you may be magnesium deficient.

It’s a deficiency that plagues the western world, and short of getting tested, one of the common symptoms is chocolate cravings and it’s no coincidence that dark chocolate is rich is this essential mineral.

So if your cravings for Milky Ways isn’t subsiding it might be a good idea to get tested, or grab yourself a non-oxide supplement to see whether it has any effect on your need for chocolate.

Treating yourself to a food you’re craving once in a while isn’t unhealthy. In fact it’s quite the opposite. Food is meant to be enjoyed, not simply used as a tool to get shredded abs.

So whilst you have these options available to you, if it’s a once a week deal, or a special occasion? Cut yourself a little slack- you’re only human, after all.

Getting your head around what to eat, when to eat, how much to eat and when it’s OK to give in to your cravings (as discussed in this article) can be very confusing.

Tailored nutritional advice is part of all our programmes here at Luke Bremner Fitness so you can enjoy treats with confidence to support your weight loss or health boosting goals.

To find our more about our nutrition coaching, programmes and how we can help you achieve your goals, you can book in for your complimentary consultation.

>> You can apply for your consultation here.

For more expert advice on health, fitness, nutrition and weight loss, please like our Facebook page by clicking the button below:

Click The Button Below To Apply For Your Free Consultation

Find Us On Social Media